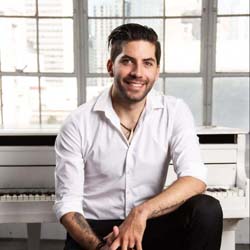 Chris was born and raised in Austin, Texas where he started learning piano at the age of 5, harp at the age of 7, and drums at the age of 12. He has since also picked up the accordion, bass, guitar, and harmonica. From the ages of 15 to 26 Chris performed and toured with several different bands, including opening for Pat Benatar.

He continued touring and performing up until moving to southern Colorado in 2015 where he started focusing solely on his own compositions. He most recently recorded with the Colorado Symphony Orchestra and moved to Los Angeles. Chris has been teaching since 2014 and loves being able to share his passion for music with his students. Not only is he proficient in the piano, but he also plays harp, accordion, drums, guitar, and sings! He is a patient, supportive teacher and encourages his students to not only explore all types of music but to also explore writing their own songs. He believes everyone, no matter what age they are, should learn an instrument.