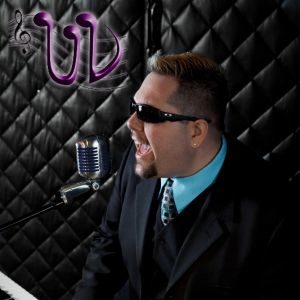 He’s paid his dues as a performer by touring internationally with a wide variety of artists (playing everywhere from Israel, to Germany, to the Czech Republic, England, France, Canada and the United States). From all of this, he’s earned a stellar reputation as an excellent performer, musician, singer, songwriter, musical director, and band leader.

Currently, UV is the Musical Director for The Sweet Beats Band, as well as their keyboard player and singer.  He has also been teaching piano and voice with At Your Door Music since 2005. When not performing, UV can be found in his recording studio (The UV Studio) producing and recording demos, music for film, independent and commercial projects.
Listen to UV’s original music here:
www.PlayUV.com

At one year old my dad sat me at the piano to “play” and I even have the picture to prove it! Seriously though, I started piano lessons at age five. I began studying voice at age 12.

I earned my Bachelor of Music degree from Berklee College of Music with a major in Film Scoring and a minor in Performance. I’ve studied both Piano and Voice extensively through dozens of courses with Berklee’s phenomenal staff. Some of the classes I’ve taken include Traditional and Contemporary Composition and Arranging, Conducting, Orchestral Scoring, Jazz Studies, Harmony, Counterpoint, Ear Training (Harmonic & Rhythmic), Transcription, Music History, Music Analysis, Principles and Techniques for the Voice and much, much more.

I love honest music! I prefer to play songs written from the heart that have a good melody and groove. I like to play many different popular musical styles out there today.

I teach all popular styles of music (jazz, rock, pop, funk, rhythm & blues, blues, reggae, gospel, musicals, Latin, country, fusion and more). I also have a background in classical music so I can teach that as well.

I perform weekly at clubs, weddings, corporate parties and private functions. I’m the founder, lead singer and piano player for “Nightlife,” an eight piece band including horns, male and female vocalists. I also play as a soloist and with a jazz trio. I’ve toured in Israel, Germany, the Czech Republic, England, France, Canada, and the United States. I also play benefit concerts for a wide range of causes including for children with cancer and autism.

I’m a singer, songwriter, recording artist, film composer, performer and an educator. I record songs that I compose and other people’s compositions as well. I hope to have my songs on TV and radio around the world. I’ve also written music for short films. I just finished composing music for an educational medical animation film that will be distributed internationally.

To express myself honestly in every musical path I take; to leave behind a musical library on my compositions; to sing and play in every major city in the world.